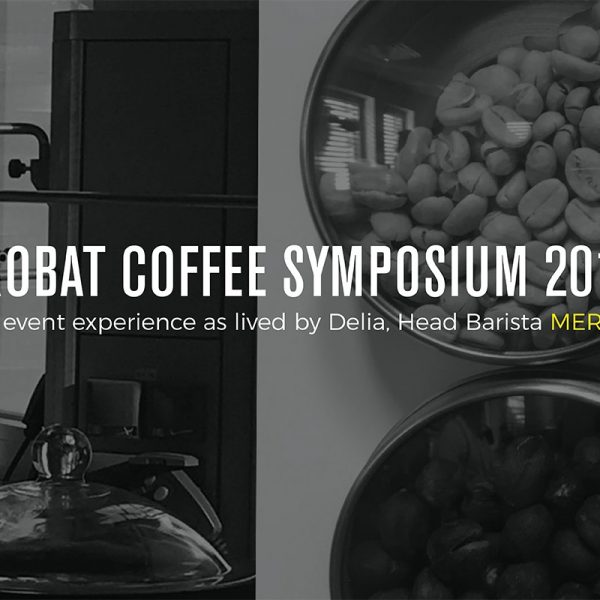 Probat celebrated 150 years of hard work, innovative machines and passion for coffee industry. It was the perfect timing for us to be there, to learn things, to see how the coffee technology leaders do it, because our dream to have our own roastery is getting real.

We asked our head barista, Delia, to come home with the coolest stories she can get from there and share it with you, all the curious coffee lovers. For two days, Delia went to all the conferences and talks at the Probat Coffee Symposium, following the most brilliant people in specialty coffee industry, carefully taking notes and meeting with the most important people in this field.

First book in coffee industry was for her “The Professional Barista’s Handbook” written by Scott Rao. A book that guided her and helped her in developing as a barista. She listened with emotion and interest the man she knew only from the book’s pages.

Scott is working in coffee industry since 1993. In 1994 he started to worked in a roastery. Over the years, Scott worked on a large range of machines, but at this hour, he is giving advice in optimizing, and getting the maximum out of the roasting process.

Should we be worried that we will remain without coffee?

They had an open talk about the increasing of coffee consumption and how the climate changes will affect the countries which are able to produce coffee.

Over time, coffee met challenges it passed over. There are diseases which affected the coffee plantations in Kenia, where the answer of science was immediate and so appeared the SL varieties developed by  Scott Laboratories between 1934-1963, based on Moka and Bourbon (SL28, SL 34). It is important to let you know that these varieties are not genetically modified, but carefully selected and developed in a laboratory. In Central America diseases like coffee leaf rust and other different pests were carefully controlled.

The challenges in coffee industry always existed, but they managed to deal with them every time, and they will manage the climate changes too. If we take a look at all the good farmers everywhere in the world, we can see some really good things they have in common like:

“We have to be here, to be present and take care of the climatic changes” Tim Schilling

Until 2050, half of the coffee making areas won’t be suitable for this kind of activity – according to a development model.

Even though, the farmers won’t let those changes happen without doing something in this way. The technology is one of the support lever for them. What we do today may be good for tomorrow, but not necessarily for the day after. Who knows, maybe someday we will grow coffee on Mars.

While some zones become unsuitable to grow coffee, they discover new zones. (for example California which is a coffee origin now). How can we make coffee more sustainable? It requires more support from the coffee industry to help farmers be less vulnerable. It would be place for a Robusta carefully grown and roasted in specialty coffee industry? Is Robusta the answer to the climatic change? At this time there is one Robusta which got a 84 score.

Makes the difference between commodity consumers and personal consumers. The value and relevance become very important. We have products with a high emotional charge. The consumers search an emotional connection with the coffee. Specialty coffee is so special because of the involved people. The brand must have a personal value. There aren’t only specialty coffee farmers in the world. All of them are simply farmers.

Where will specialty coffee come from?

In the second part of the conference, Ivana Beslagic shares with the public the hands-on experience in which she saw how can we influence the coffee flavors depending on the roasting profile. She showed to the participants the endothermic and exothermic reactions through which the coffee bean passes when we apply a heat source. This presentation had a sensory session as a workshop in the R&D (Research and Development) Sector Probat.

How 150 years of history, development and project implementation are hard to be neglected, the night ended with a “get together” where the passionate people shared ideas, experiences and conclusions. That was Delia’s occasion to see how people with experiences over 20 years are simple people, who put their interest, and have devoted everyday so this product-coffee- to be better, as corrected prepared as possible, and more accessible to everyone.

Probat holds 7 desks in Germany, Italy US, Canada, Brazil and India. There are other 40 employees in the world which ensure proximity to the client.

16.456 km crossed a collaborator from Melbourne Australia, to Emmerich to get to the manufacture.

18.500 m2 is the production zone of Probat – approximately 2.6 times bigger that a football field.

900.000 code lines were written for the Probat’s data management system.

1.450 meters is the altitude where the Probat Farm, Songwa Estates, Tanzania is.

A business grows only if between it’s customers are expert people.

1870 – was invented the first patent for the spheric roaster. (the ball roaster)

1884 – is patented „Kaffeeschnellröster” the first roaster with fast burn. This model was the one who sat at the base of developing the drum roaster.

1944 – The regression. Emmerich town, along with the factory are destroyed in the Second World War.

1949 – The reconstruction. It is poured the new foundation, which marks the start of a new era.

Laboratory of Development and Research where the coffee can be tested in all the angles to discover every details is opened. In a nearby room the coffee is being analysed.

2017 – The integrated solution for the volume factory “the smart factory” is launched. This program optimize the roasting processes ad makes the machines more efficient.

2018 – Probat celebrates 150 years this year. Now we can look back and be proud of the implemented solutions and the developed products, but in the same time let’s look forward and focus on the future.

At this point we can say that 2 out of 3 coffees prepared worldwide pass through an equipment developed by Probat.

Probat is a Latin word which means proven, tested and retested.